As part of the Qinos project funded by the BMBF, a new high-performance electron beam lithography was installed in the cleanroom at the end of 2021 by the Integrated Quantum Optics group of Prof. Christine Silberhorn. The system was delivered from nearby Dortmund, packed in two large wooden crates. These crates, along with several other boxes and pallets containing the sensitive components were delivered to P5 building and transported from there to the cleanroom in P8, where the system then installed.

The new high-performance electron beam lithography opens the possibility of writing extremely fine structures of a few nanometers in size on areas of several square centimetres. These fine structures are necessary to produce novel quantum components with the desired quality. "High-precision lithography enables functionalities that were previously impossible to implement, such as fast electro-optical switches or highly efficient photon-pair sources," explains Dr. Christof Eigner, who took over the project responsibility for the expansion of the infrastructure. Thin-film lithium niobate (LNOI) is a promising candidate for quantum applications. “LNOI offers the possibility to produce highly efficient and at the same time extremely compact components. The structures are in the range of a few hundred nanometers. This enables us to realize novel applications of quantum technologies that were previously not feasible”, explains Laura Padberg, doctoral student and the main person responsible for operating the high-performance electron beam lithography system and the development of quantum elements in LNOI in Prof. Dr. Christine Silberhorn’s group.

"For the Institute for Photonic Quantum Systems (PhoQS) and also the Paderborn physics department, the acquisition of the high-performance electron beam lithography is a big step in the field of nanostructuring," continues Christof Eigner, PhoQS infrastructure manager.

The BMBF is supporting the project as part of the “Quantum Technologies – From the Basics to the Market” funding program (funding reference number: 13N15975). 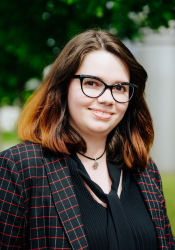