Optoelectronic technology enables archery for blind people in the Haxterpark

Blind people can now learn archery at the Haxterpark with an innovative optoelectronic target unit. The technology and know-how for this issue was established in the optoelectronics laboratories of Prof. Artur Zrenner as a result of many years of research experience. The target is detected by an infrared camera attached to the arch. Designed as a profile sensor, this camera is capable of determining the horizontal and vertical position of the target at a high frame rate. The result is an agile and energy-efficient detection system. The collected signals are transmitted to a smartphone via Bluetooth. To complete the system, Christopher Schrewing programmed an audio app for smartphones as part of his bachelor thesis. With help of this app, the space coordinates are converted into acoustic signals, which the archer perceives via headphones. The left-right deviation from the bullseye is transferred into a variation of the volume of a tone on the left or right earcup. The top-bottom deviation is represented by different sound frequencies, with the highest tone corresponding to the exact target detection.

The project was developed in cooperation with Haxterpark Paderborn and was financially supported by the "Alfried Krupp von Bohlen und Halbach Foundation". On August 1, 2018, the new technology was officially presented by Prof. Artur Zrenner, Center for Optoelectronics and Photonics of the University of Paderborn (CeOPP), Christopher Schrewing, and Helmut Böhmer, Managing Director of Haxterpark. Photo (AG Zrenner): The optoelectronic aiming device is mounted at the front of the arch. Download (4 MB) 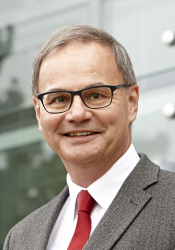